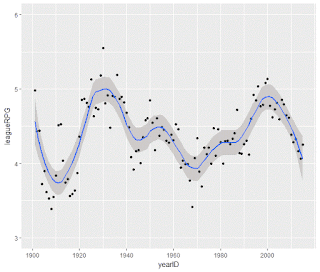 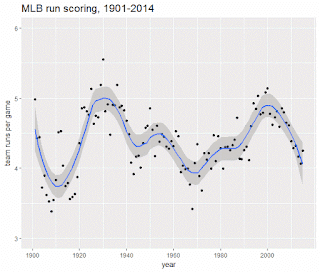 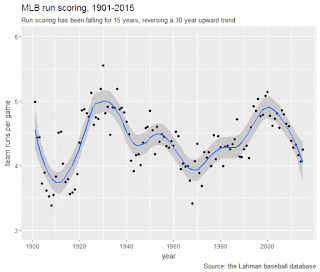 Adding a subtitle to ggplot2

A couple of days ago (2016-03-12) a short blog post by Bob Rudis appeared on R-bloggers.com, "Subtitles in ggplot2". I was intrigued by the idea and what this could mean for my own plotting efforts, and it turned out to be very simple to apply. (Note that Bob's post originally appeared on his own blog, as "Subtitles in ggplot2".)
In order to see if I could create a plot with a subtitle, I went back to some of my own code drawing on the Lahman database package. The code below summarizes the data using dplyr, and creates a ggplot2 plot showing the annual average number of runs scored by each team in every season from 1901 through 2014, including a trend line using the loess smoothing method.

Below is the code to create the plot, including the formatting. Note the hjust=0 (for horizontal justification = left) in the plot.title line. This is because the default for the title is to be centred, while the subtitle is to be justified to the left.

Adding a subtitle: the function

So now we have a nice looking dot plot showing the average number of runs scored per game for the years 1901-2014.

But a popular feature of charts--particularly in magazines--is a subtitle that has a summary of what the chart shows and/or what the author wants to emphasize.

How can we add a subtitle to our chart that does that?

The function Bob Rudis has created quickly and easily allows us to add a subtitle. The following code is taken from his blog post. Note that the code for this function relies on two additional packages, grid and gtable. Other than the package loads, this is a straight copy/paste from Bob's blog post.

Now we've got the function loaded into our R workspace, the steps are easy:


Wasn't that easy? Thanks, Bob!

And it's going to get easier; in the few days since his blog post, Bob has taken this into the ggplot2 development environment, working on the code necessary to add this as a simple extension to the package's already extensive functionality. And Jan Schulz has chimed in, adding the ability to add a text annotation (e.g. the data source) under the plot. It's early days, but it's looking great. (See ggplot2 Pull request #1582.) Thanks, Bob and Jan!

And thanks also to the rest of the ggplot2 developers, for making those of us who use the package create good-looking and effective data visualization. Ain't open development great?

One of the great strengths of R is that there are some robust (and always improving) packages that facilitate great data visualization and tabular summaries. Beyond the capabilities built into the base version of R, packages such as ggplot2 (my favourite), lattice, and vcd and vcdExtra extend the possibilities for rendering charts and graphs, and a similar variety exist for reproducing tables. And accompanying these packages have been a variety of fine instruction manuals that delineate the code necessary to produce high-quality and reproducible outputs. (You can’t go wrong by starting with Winston Chang’s R Graphics Cookbook, and the R Graph Catalog based on Naomi Robbins’s Creating More Effective Graphs, created and maintained by Joanna Zhao and Jennifer Bryan at the University of British Columbia.)

Let’s call these the “how” resources; once you’ve determined you want a Cleveland plot (which are sometimes called “lollipop plots”—please, just stop it), these sources provide the code for that style of chart, including the myriad options available to you.

Elsewhere, there has been a similar explosion in the number of books that build on research and examples as to what makes a good graphic. These are the “what” books; the authors include the aforementioned William Cleveland and Naomi Robbins, and also include Stephen Few and Edward R. Tufte. Also making an appearance are books that codify the “why”, written by the likes of Alberto Cairo and Nathan Yau.

The recently published Storytelling with Data: A Data Visualization Guide for Business Professionals by Cole Nussbaumer Knaflic falls into the latter category, and it’s one of the best I’ve seen to date. Although the subtitle indicates the intended audience, I believe that anyone involved in creating data-driven visualizations would benefit from reading and learning from it.

The book is relatively software agnostic, although Nussbaumer Knaflic recognizes the ubiquity of Excel and has used it to produce the charts in the book. She also provides some sidebar commentary and tools via her website http://www.storytellingwithdata.com/ specifically using Excel. For R users, this shouldn’t pose a particular challenge or barrier; the worst-case scenario is that it provides an opportunity to learn how to use R to replicate the book’s examples.

One of the strengths of the book is that Nussbaumer Knaflic takes the approach of starting with a chart (often a real-life example published elsewhere), and then iterates through one or more options before arriving at the finished product. One instance is the step-by-step decluttering of a line graph, which becomes substantially improved through a six step process. This example re-appears later, first in the chapter on the use of preattentive attributes and then again in the chapter titled “Think like a designer”. This approach reinforces the second of Nussbaumer Knaflic’s tips that close the book, “iterate and seek feedback”.

Nussbaumer Knaflic also introduces the Gestalt Principles of Visual Perception, and provides vivid examples of how these principles play out in data visualizations.

All of the discussion of graphics is wrapped in the context of storytelling. That is to say, the data visualization is always in the service of making a point about what the data tell us. In the context of business, this then translates into influencing decisions. The chapter “Lessons in storytelling” falls almost exactly in the middle of the book; after we’ve been introduced to the principles of making good data visualizations, Nussbaumer Knaflic gives us a way to think about the purpose of the visualization. With all of the pieces in place, the remainder of the book is focussed on the applications of storytelling with data.

The book is supported with Nussbaumer Knaflic’s site storytellingwithdata.com, which includes her blog. Check out her blog entry/discussion with Steven Few “Is there a single right answer?”), and some makeovers (in the Gallery) where she redraws some problematic charts that have appeared in the public domain.

All in all, Cole Nussbaumer Knaflic’s Storytelling with Data is a succinct and focussed book, one that clearly adopts and demonstrates the enormous value of the principles that it espouses. Highly recommended to anyone, of any skill level, who is interested in making effective data visualizations, and the effective use of those visualizations.

Cole Nussbaumer Knaflic’s Storytelling with Data: A Data Visualization Guide for Business Professionals was published in 2015 by Wiley.

Note: the authors of the following books have all published additional books on these topics; I’ve simply selected the ones that most closely fit with the context of this review. All are recommended.