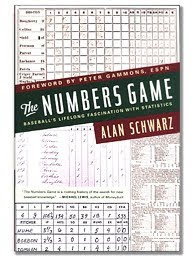 The Numbers Game: Baseball's Lifelong Fascination with Statistics, by Alan Schwarz. 2004, St. Martin's Press.
In The Numbers Game, Alan Schwarz presents a well-written and tidy history of the development and evolution of the statistics that record the history of the game. Or more accurately, it's a history of baseball, and its evolution over the past century and a half, from the perspective of the numerical record and analysis of the game.
Thus Schwarz begins in the mid-nineteenth century, with Henry Chadwick's influence on the information that got recorded. But more importantly, Schwarz points out (and this becomes a recurring theme) that how the game was played was an influence on what got recorded. In the early days, the ball was "pitched" to the batter in a way that facilitated batting it -- and because pitching was secondary to hitting and fielding, there was no record of pitching performance. And as the game evolved, so did the numbers that recorded the game and got used to evaluate the players.
A second recurring theme is the weaving of the technical aspects of the statistics with the personal characters of those who developed and promoted various measures. This is very much a character-driven book -- we hear not only about the "why" of the statistics that were recorded, but the people who developed them and the means of recording them. So we hear about Al Munro Elias, Allan Roth's career with the Dodgers, Hal Richman's development of Strat-O-Matic, and George Lindsey's articles that appeared in academic journals beginning in the late 1950s. We also get an entire chapter devoted to the publication in 1969 of The Baseball Encyclopedia, and another to Bill James.

One of the things that jumps out to me is the impact that computers-- particularly the personal computer -- has had on the volume of statistics available, and the precision of the analysis that is now available. (And what is perhaps a topic for another day, the proliferation of analysts of varying quality.)
In The Numbers Game, Schwarz has written what may well be the single best introduction to sabermetrics. But it's not a technical manual that will tell you how to calculate any one statistic, or how another measure should be interpreted. Instead it's a lively history of major league baseball, and the numerical record and analysis that accompanies it.
Assessment: home run.
Posted by Martin Monkman at 5:18 PM