OT: Unemployment Rates in the U.S.A.

A great example of a truly awful graph was posted on Flowing Data, starting a conversation on The Book.

Wexler/27 beat me to the BLS data sets... I will  note that the "discouraged" numbers can be found in the "characteristics of the unemployed" tables.  The different ways of parsing what constitutes "unemployment" are ways to try to get to the nuance in why people aren't working.  The narrow "actively seeking work" definition of defining who is in the labour market is a way to cut through demographic changes (e.g. in the post-WWII period, when most women were June Cleavering and not seeking work), increases in post-secondary enrollments, etc.
With that said, the increase in people who have thrown in the towel is, to me, one of the most disturbing parts of the current recession.
Wexler/7 and MGL/8 raise the question of attribution -- how much is the President (in the current circumstance, Obama) responsible for unemployment rates?
I dug up some historical U.S. unemployment rate data going back to 1948, and I have posted a chart of it to my own blog (because I have no idea how to do that directly).
A summary:  the current increase in unemployment started in the last year of G.W. Bush's 2nd term (rising from 5.0% in January 2008 to 6.8% by the November, the month of the election).  Going back, there was a peak in unemployment during the first G.W. presidency, and another that straddled G.H.W. Bush and Clinton.  And the worst unemployment rates since the Great Depression (higher rates and with a longer peak than the current phase) were during the first term of Ronald Reagan's presidency. 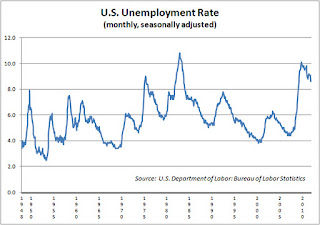 And for those of you wanting to focus on the more recent period, the past 20 years (less a month): 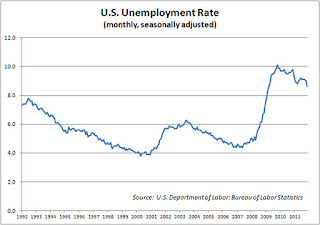 I obtained the U.S. Department of Labor data set from the Economic Research pages of the Federal Reserve Bank of St. Louis here, and have converted that text file to an Excel file.