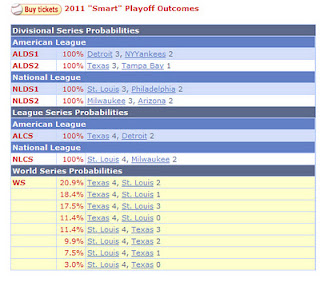 (The "dumb" prediction is 50/50 for either team, so there's no point talking about that. And I've posted a screenshot, since their predictions are live and will change upon the outcome of the first game of the World Series. An example of the Monty Hall problem, in real life.)

To summarize:  Texas shows as having a 68.2% probability of winning the World Series.

I'm not sure of the details of their methodology, but we can use each team's regular season win/loss record to employ the "log5" approach to come up with our own prediction.  So I did that, and my first prediction is for a Texas victory (58% probability) -- and if pressed to predict the series length, it would be Texas in 6 games (17% of the outcomes are Texas 4-2).  Both probabilities are substantially lower than the coolstandings prediction.

But we can be a bit more sophisticated in our approach, using an adjusted win/loss percentage that employs a Bayesian adjustment to each team's final result.  (This is the same method I used back in May for the early season results -- after 162 games the impact of the prior is much reduced.) This changes Texas' winning percentage to 0.571, and St. Louis to 0.543.  (Google doc spreadsheet here.)  Using the log5 formula, this gives the Rangers a 0.538 edge over the Cardinals.

Working through the 7 game series, Texas' probability of winning the World Series is 56%.

And we can be still more clever, by considering the road/home splits of each team.


The home-road splits improve things for the Cardinals, since they had a better home record than Texas' road record and thus become more likely to win a home game. As well, the Cardinals have home field advantage (but only on game 7 -- the Rangers have home field advantage in a 5-game series. But I digress.)  After using the home-road splits, Texas still remains the favorite, but the probability is down to 54%.

While my approaches still give Texas the biggest likelihood of victory, my estimates are less emphatic than the probabilities over at coolstandings.  Based on the characterizations used at coolstandings, my methods lie somewhere between "dumb" and "smart".  "Average intelligence", perhaps. 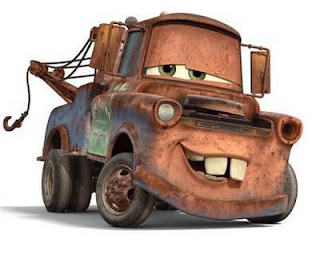 Tow Mater says "Rangers in 6. But I had the Phillies and the Brewers beating the Cardinals, too".
-30-
Posted by Martin Monkman at 7:11 PM