Social mobility toward the mean

The April 8, 2011 edition of the BBC radio program More or Less* includes a discussion of regression toward the mean in the context of social mobility stats in the U.K.  Most of the analysis has focussed on the impact social class has on long-term education outcomes. In particular, much has been made of the fact that the analysis suggests that the low ability children from high social class catch up and pass the high ability children from low social class. 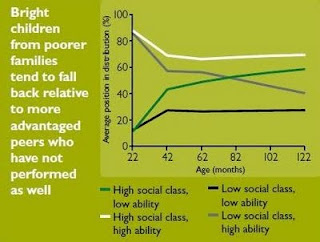 But in the broadcast Daniel Read, professor at Warwick Business School, has offered a critique (link to written version) that points out that the analysis has not accounted for "one of the oldest statistical problems of all" (the BBC's description): regression toward the mean. The source of the problem is correctly identified as the bias introduced by including only the highest and lowest performers in the groups shown in the chart. The children closest to the mean for that social class have been excluded.

Because only the extreme ends of the education outcomes tests of the two social class groups have been selected, the poorest performers naturally show improvements while the higher performers show declines. From the broadcast:


It's not that it's [the differences in outcomes between social class] all fluke. But if there's any element of luck at all -- which there surely is, because we're talking about ability tests for toddlers -- then we have to allow for what we'd expect to happen when that luck fails to last.  And what we'd expect to happen is pretty much what the graph in the government's social mobility strategy shows, which is that the next time you test the children all the high performers have dropped off. But especially the poorer kids who, remember, Nick Clegg says were disadvantaged from birth. And all the lower performers have caught up, but especially the richer kids. And then as you continue to test, the richer kids gain on the poorer kids at a very much less dramatic pace.

The easiest way to spot the regression towards the mean? The enormous change from the first to the second measurement, as much of the selection bias at the first measurement point disappears. The high and low performers were selected not on the basis of their long-term outcomes, but on the results of the first test. In subsequent tests the children in these extreme cases will move toward the mean, and closer to their "true talent".