In 1988, the Bill James Abstract included "A Bill James Primer", with 15 statements expressing what he deemed to be useful knowledge. On that list was:
2. Talent in baseball is not normally distributed. It is a pyramid. For every player who is 10 percent above the average player, there are probably twenty players who are 10 percent below average.


I agree. (Others don't; for further discussion also see here.)


But what is this thing called "talent"? Talent is a combination of a high level of skill and sustained, consistent performance. Skill in baseball is measured through metrics such as ERA (earned run average) and OPS (on-base average plus slugging percentage) -- measures that turn counting stats into an efficiency or rate measure. While this type of measure is important, they fail to account for the fact that some players have lengthy careers, while other players have a very short MLB career. Teams will sign long-term contracts with aging superstars because the player's skill is still above average, even though they may have diminished with age.


In short, career length becomes a valid proxy for talent.


At the head of the "games" list at 898 is the still-active Mariano Rivera, while the pitcher with the most innings over this period was Greg Maddux (2887.67 innings; and Maddux threw more than 2,100 innings before 1996, as well). These two individuals, and other Hall of Fame calibre pitchers, are out at the far right of the long tail. Close to the origin at the left are pitchers whose entire career lasted but 1/3 of an inning -- a single out.
Figure 1: Number of Pitchers, by Career Innings Pitched (1996-2009) 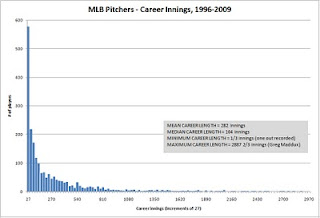 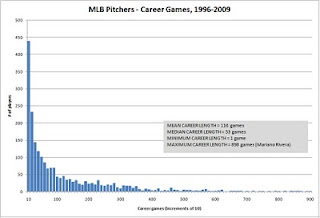 In spite of the wide variance in the ERAs of the coffee drinkers, the differences in the mean scores are statistically significant.

In summary: there is an abundance of players who are less talented than the major league average, while at the same time the number of above-average talents is low. The distribution, at the major league level, is not normal. Just like Bill James said 22 years ago.